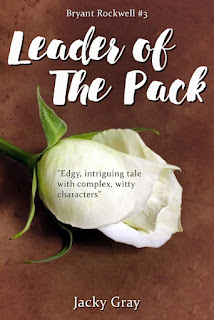 It started in a caravan in Wales after the most magical long weekend to treat hubby to an unforgettable Father's day break evah. I'm talking secret Blue Lagoons and everything.
At 3:33am, I packed the car and drove 128 miles almost due East in mostly traffic-free roads, watching not only the sun rising over fabulous Welsh mountains but, prior to that, a cheeky little crescent moon fending off the wispy clouds to dance across the sky. Heavenly!

After 5 days with virtually no internet, everything pulled together to make the release of Leader of the Pack the fastest to date.
So here it is: the third book for a mere 99p/99cents for three days.
As always, thanks to Icy for a great cover and Hannah, Alice, Paula and Ace for some nifty editing.

Why are boys like buses? None for years, then three turn up at once. Like a game show contestant, Liv has to choose between them.
Terry seems shy and afraid, but on the stage or on ice skates he morphs into a virile, leading man. But is he man enough to cope with Liv’s dynamic personality and pithy snark?
When a secret admirer sends a rose and sonnet, the smooth, Shakespeare-quoting waiter seems the obvious candidate. Danger and excitement lurk behind this door when Liv discovers the charming James hides a shady past.
Drop-dead-gorgeous Ray ticks all Liv’s boxes. His wheelchair might stop him from doing the Argentine Tango, but so far, no boy will dance with her. The universe conspires to keep them apart; why else would she black out each time he kisses her?
The prize? Her sanity, her memory and her heart.
Posted by Jacky Gray at 15:55